What follows is an account of our Sanity Project, succinctly named by my wife Rachel. The project is a redesign of our backyard with the ultimate goal of turning it into a healthy ecosystem – a sort of trans-species collaboration. Nearly all of the world’s many problems are outside of our control, but this is one thing we can do.

We have two reasons for calling it the Sanity Project. First, it is a way for us to build something beautiful and meaningful while the world … does whatever it is doing. Second, sanity derives from the Latin sanitas meaning “healthy” and “sound.” Based on this etymology, therefore, I’m going to say “overall health” is a legitimate usage of the word. Our Sanity Project aims at the overall health of all the beings on our 0.14 acre city lot.

I have made halfhearted attempts at gardening in the past but this is the first attempt that has stuck. As I recall, this attempt began when I built two raised beds and filled them with garden soil shortly before I had emergency gall bladder surgery in March 2020 – the week before COVID lockdown officially began. After recovering from surgery I planted the beds with vegetables and some orange butterfly weed. 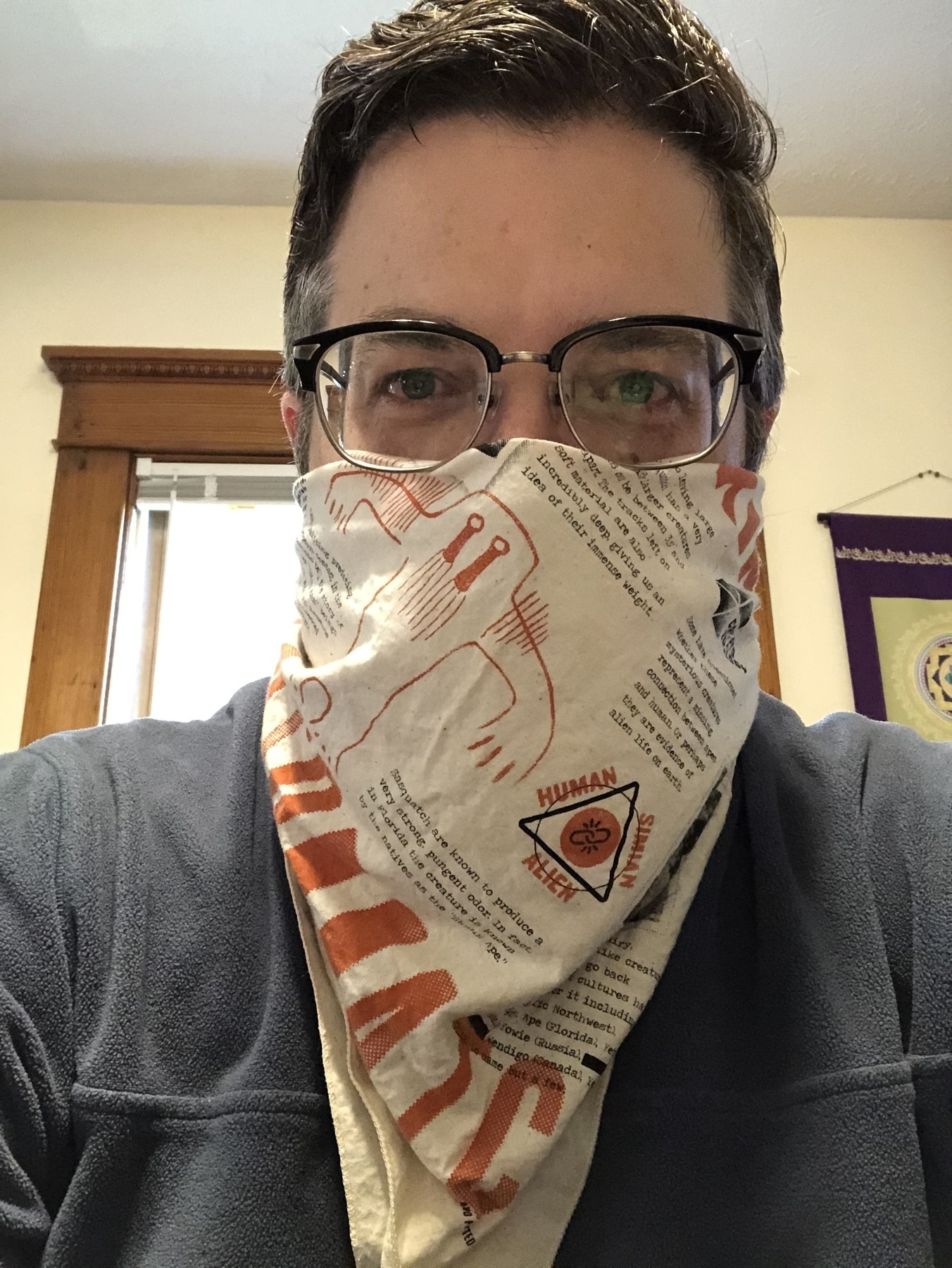 Like many others, I experienced the pandemic as both anxiety-ridden and a window into another way of working. Once the lockdowns began in March 2020, I started working from home — and, as of August 2022, that will continue into the foreseeable future. For me, this working arrangement has been an unmitigated good, centering my entire life here at home. This project would have certainly been different if it had not been for remote work.

At that point in 2020, my gardening motivations were more vague than they are now. I had just a few months before finished reading Richard Powers’ novel The Overstory and it is not an exaggeration to say it changed my life. I’ll risk sounding slightly crazy by saying the trees called to me through the book. There’s more to the story of how that unfolded in my life but for now it will suffice to say that I turned toward the more-than-human world in a way I had never done before. Building those raised beds was one of the ways that turn took physical form. 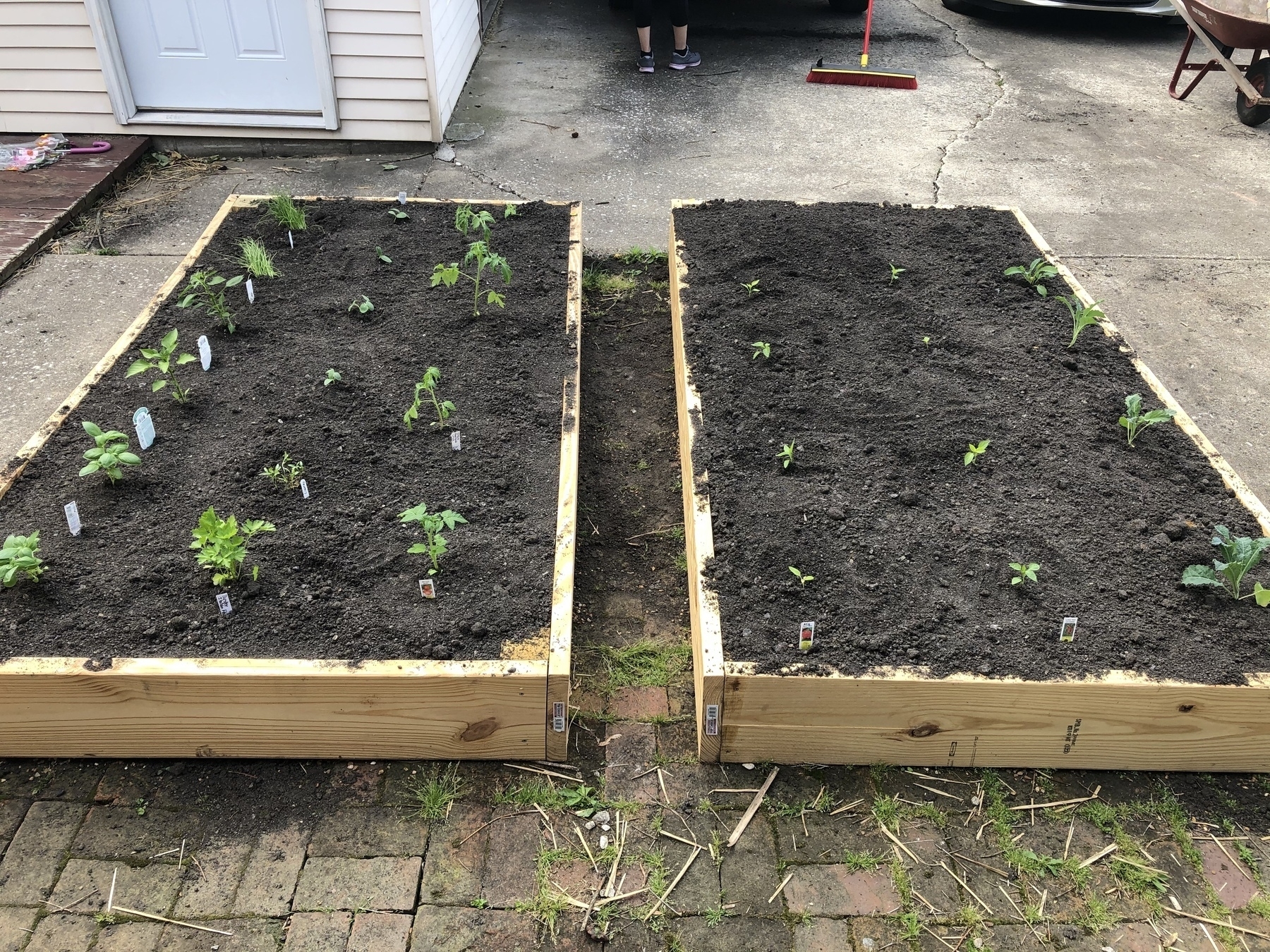 We also got some chickens in 2020, though that experiment only lasted until the Fall due to space and overwintering concerns. Those chickens are now living on a friend of a friend’s farm.

In 2021, I started thinking more in terms of planting for pollinators. While I still had a few vegetables and herbs, the raised beds were mostly full of native perennials: swamp milkweed, orange butterfly weed, hairy woodmint, purple poppy mallow, New England aster. Up to this point, Rachel was not really involved and — let’s be honest — I wasn’t doing a great job of it. And it wasn’t even really a project yet. It was me, two raised beds, and a few scattered ideas.

I said above that remote work has been an unmitigated good for me. That’s true. It’s also true that 2020-2021 were two rough years. Our little town was drawn into the battles of those years just like everywhere else — and we were continually frustrated and angry by the behavior of the majority in our town. We, frankly, wanted out. But several obstacles made moving away impossible in the short term.

We had to find a way to live with less anger. We began to unplug. Less news, less social media. I started thinking about silence and individualism and analog technology. I started questioning activism as the model for political engagement (1, 2). Faced with the monumental awfulness of the world, Rachel and I began thinking about what small, local good we could do.

Then along came a presentation by Doug Tallamy. Rachel became a believer in planting for pollinators and we started making plans. One thing I know from twenty-plus years of experience: when Rachel gets involved in something, everything gets much, much better.

The first thing Rachel did was to clean up the area (that I had been neglecting) around the raised beds, painted the back porch and raised beds, and put in several bird feeders. This alone made a huge difference. 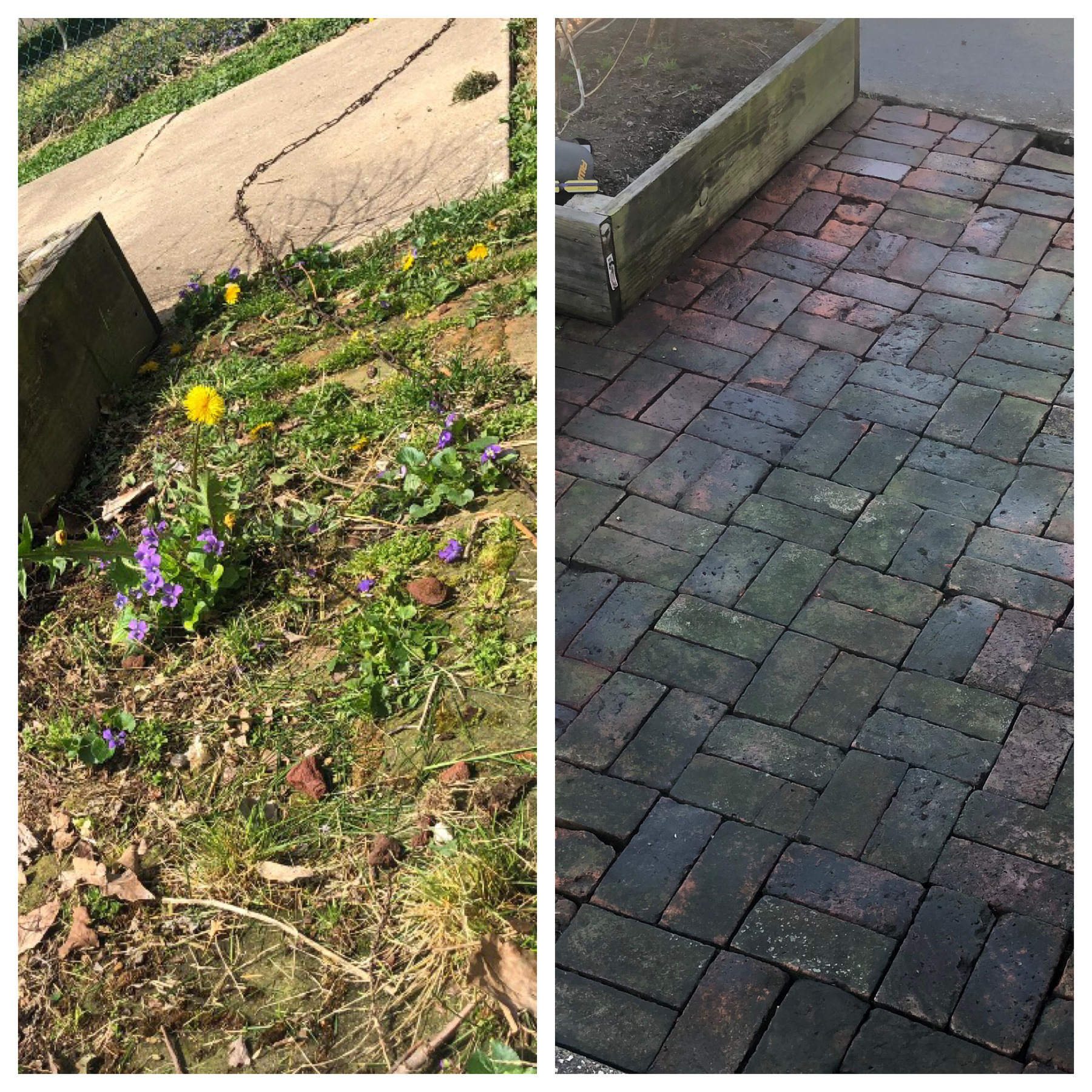 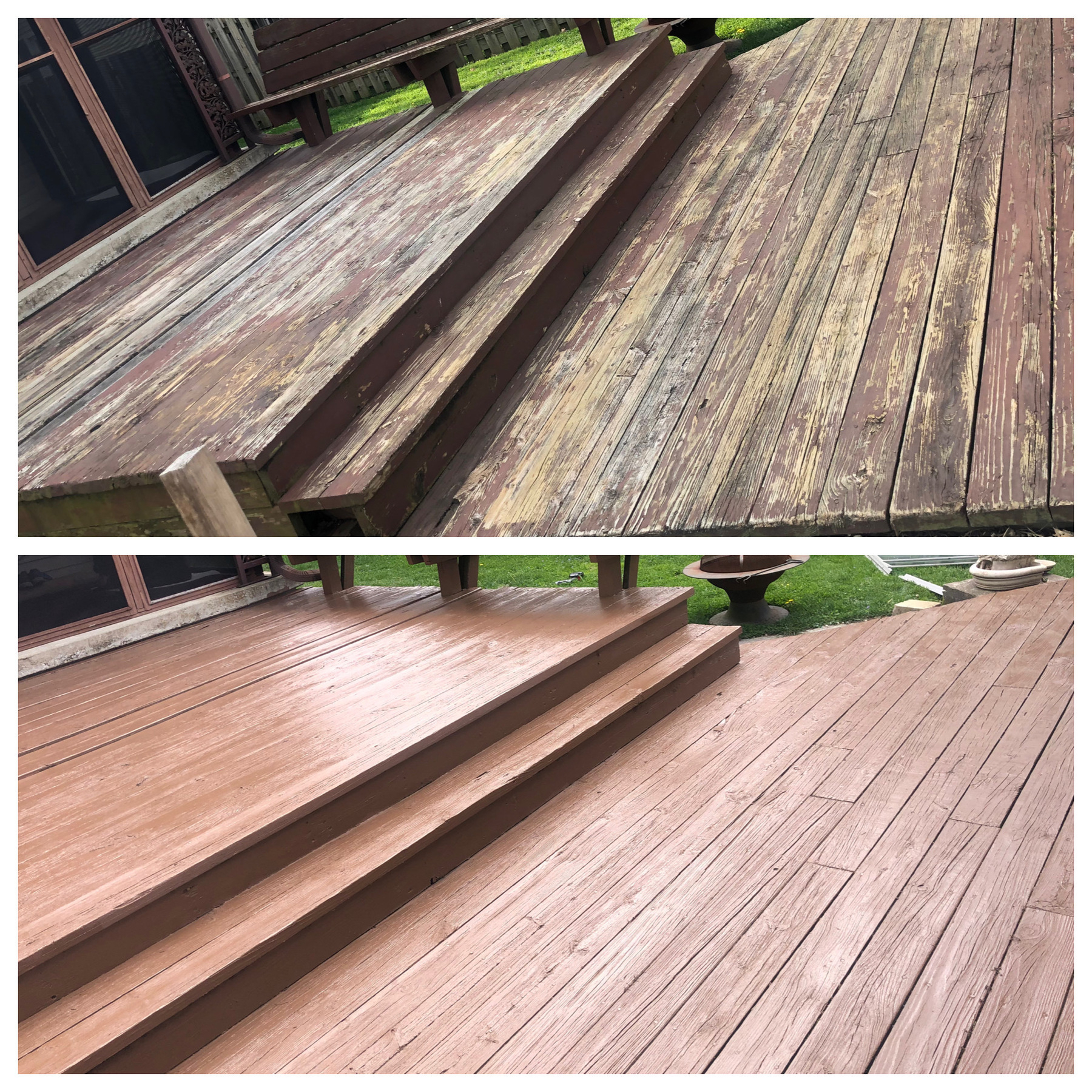 Next, we hired someone to cut out some shrubs and dig up landscaping rock in the areas we wanted to plant. Once that was done and the weather warmed up, we planted an area of our backyard bounded by a privacy fence on two sides and the back wall of our garage on the third. This notch was where our chickens had previously lived. We planted switchgrass, orange butterfly weed, joe pye weed, purple coneflower, and sunflowers. We called it Green Man’s Grotto. 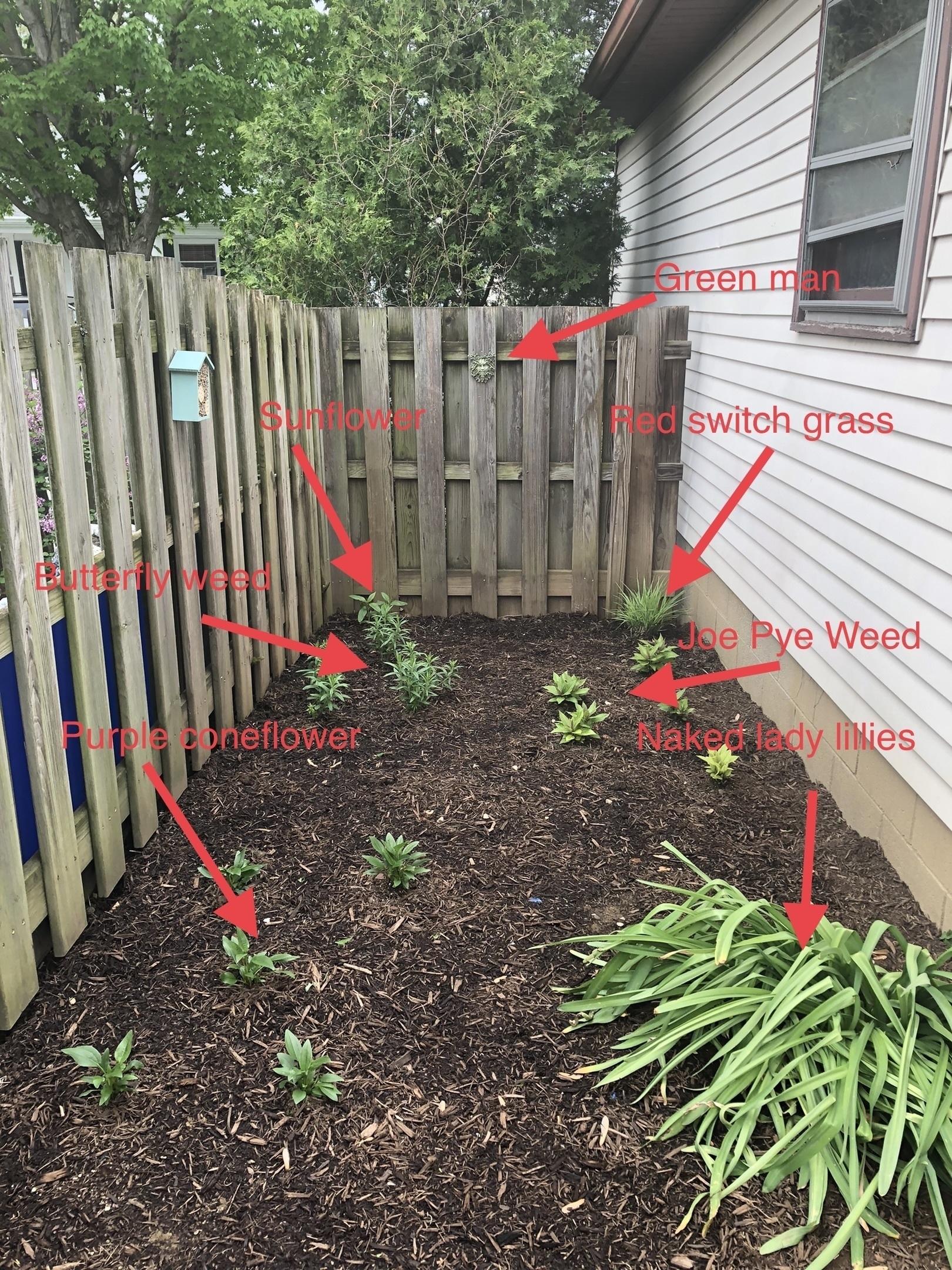 Now it felt like we were making serious efforts toward increasing relatedness on our city lot. We started composting, and then vermicomposting. Then Rachel began reading Planting for Wildlife by Jane Moore and the idea for the culminating act of the project so far took shape in her head: we built a pond.

We decided to take advantage of a large concrete block that sits at the corner of our garage (maybe the previous owner used it as a platform for planters?) and use it as the base for the fountain. And with its proximity to Green Man’s Grotto, it made sense to extend that area out around the new pond. So we watched some videos and started digging. The pond’s diameter is four feet, with a one foot wide shelf at one foot deep and then the deepest point at two feet deep. So a small pond, but it’s had a large impact. We built a fountain out of an old butter churn that came with the house and then filled the pond with blue flag iris, water lettuce, cattails, water lilies, water hyacinth, and six bullfrog tadpoles. 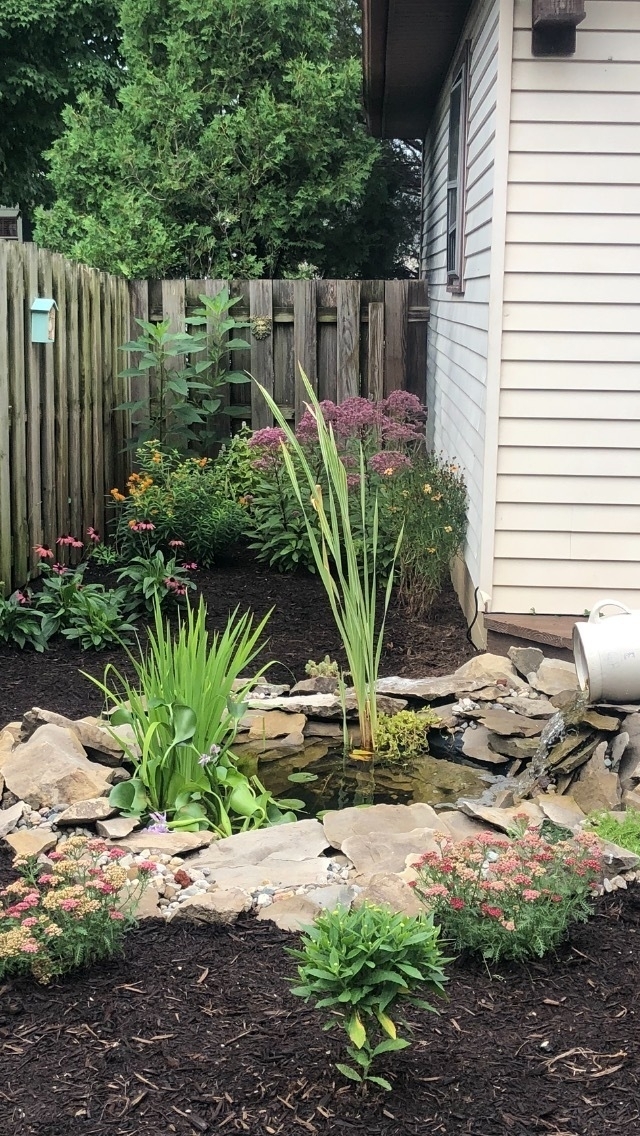 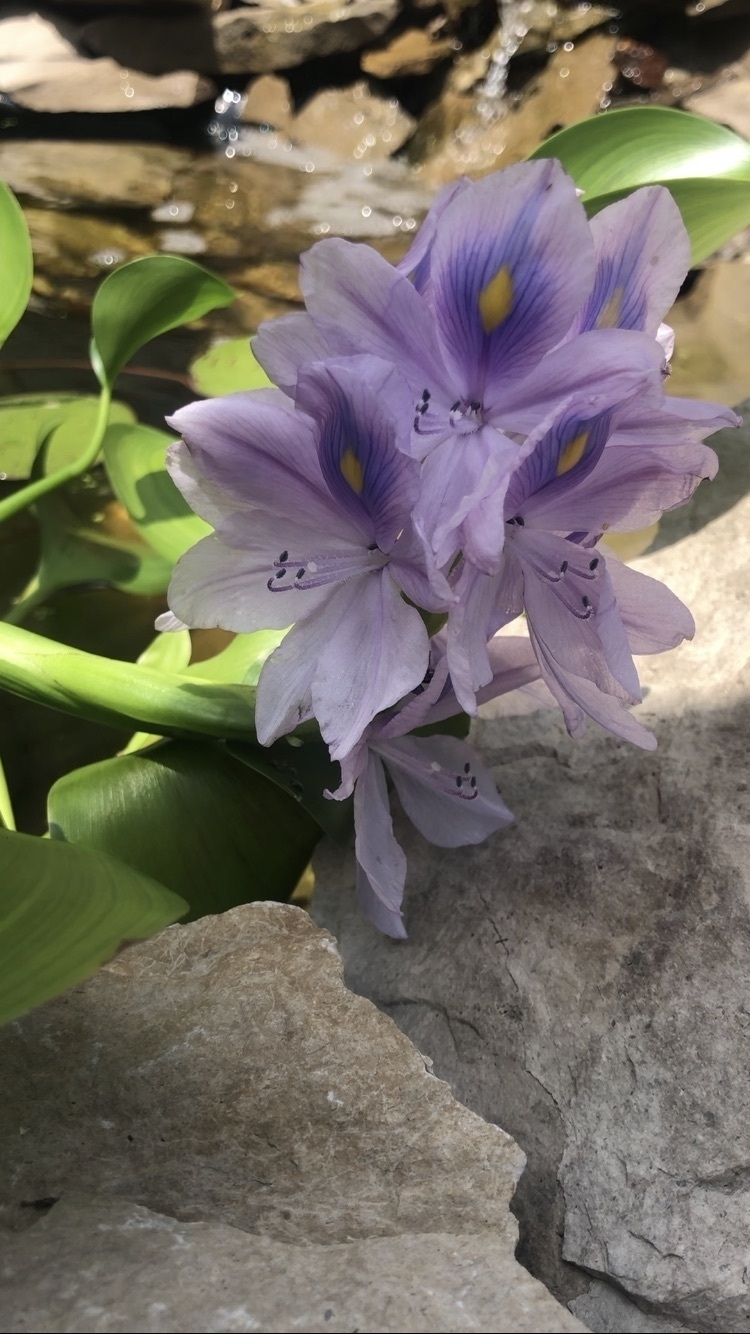 We’ve heard many people say that a pond is the best thing you can do for wildlife in your garden and we have found that to be true. And the change happens quickly! A frog found our pond almost immediately and began nightly croaking. 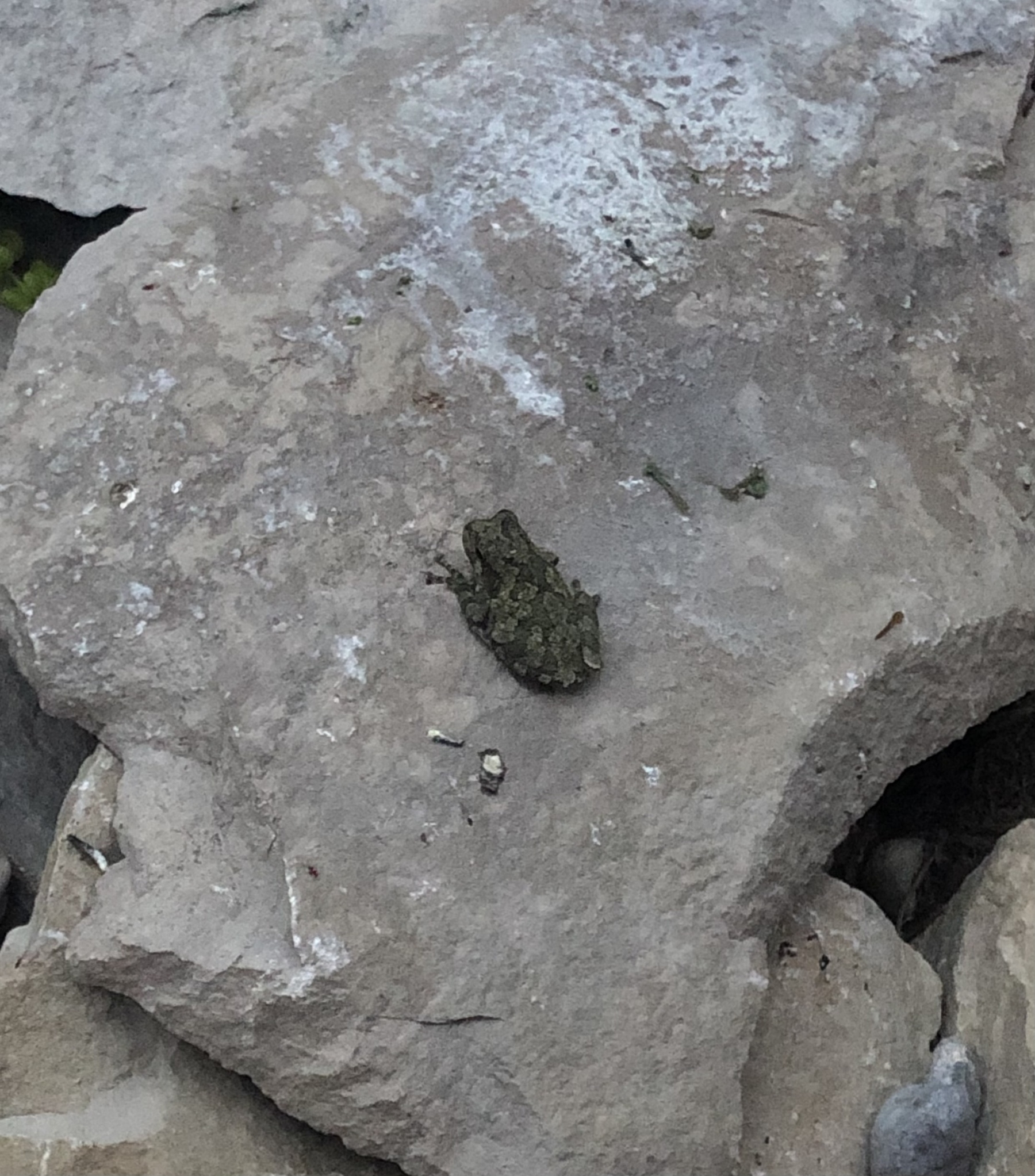 We could hear others nearby. Within a month, there were three generations of “wild” tadpoles. Water beetles and tiny aquatic snails showed up. Now we have what we think are dragonfly larvae. The Green Man appears to be pleased. 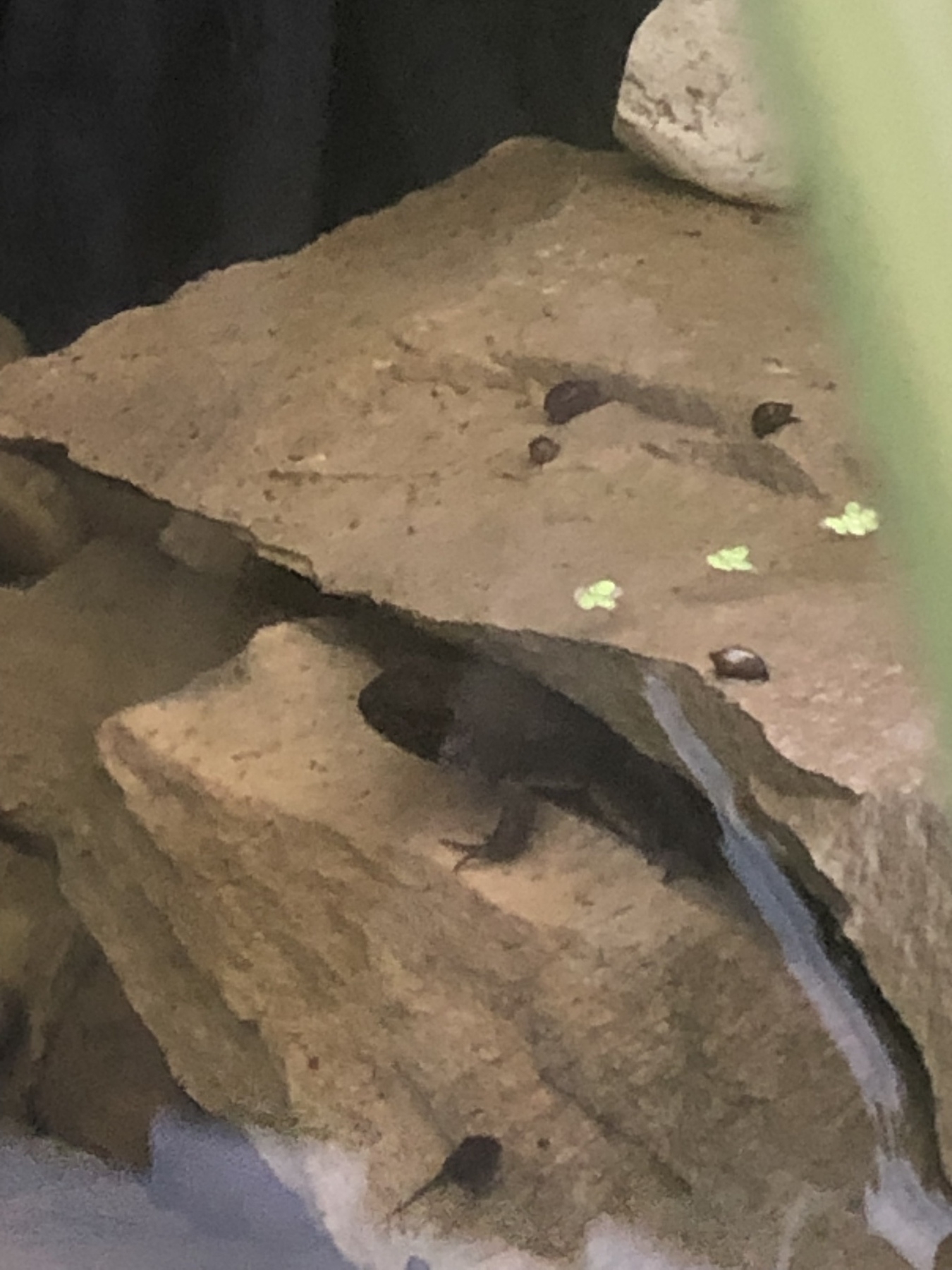 We used the dirt from the pond excavation to build a new raised bed on the back deck. We used scrap pond liner at the bottom of the raised bed to prevent water passing through and damaging the deck. We’ll see how that experiment goes. We’ve filled that bed with what we hope will be a fall garden of greens and herbs. This fall, we plan to transplant all of the perennial plants out of the two original raised beds and into Green Man’s Grotto. Fill it out a bit. Then I plan to double the depth of those two raised beds from one 2x10 to two 2x10s. Next year that will be a kitchen garden.

We’ve started collecting seeds from the native perennials and hope to raise seedlings under grow lights this winter. We have plans for more planting along the privacy fence and we’d like to plant our own seedlings instead of purchasing them from the greenhouse.

We’re talking about planting a red maple several feet from the pond. It would be nice to have a bit more shade there since that full, south-side sun can get hot.

We also want to make a Green Man’s Grotto sign to place on the fence at the entrance to the backyard.

Planning a bit further out, we’d like to eliminate most of the landscaping along the north and south sides of the house and fill the areas with native perennials. That will be a lot of work and a chunk of money, so we’re not sure if that will happen in 2023. Then there’s the front of the house, but it looks okay as-is so it can wait.

This page will be updated over time. I’ll post notifications of updates on my blog. You can also see occasional posts (usually pictures) related to this project in the Sanity Project category of my blog. 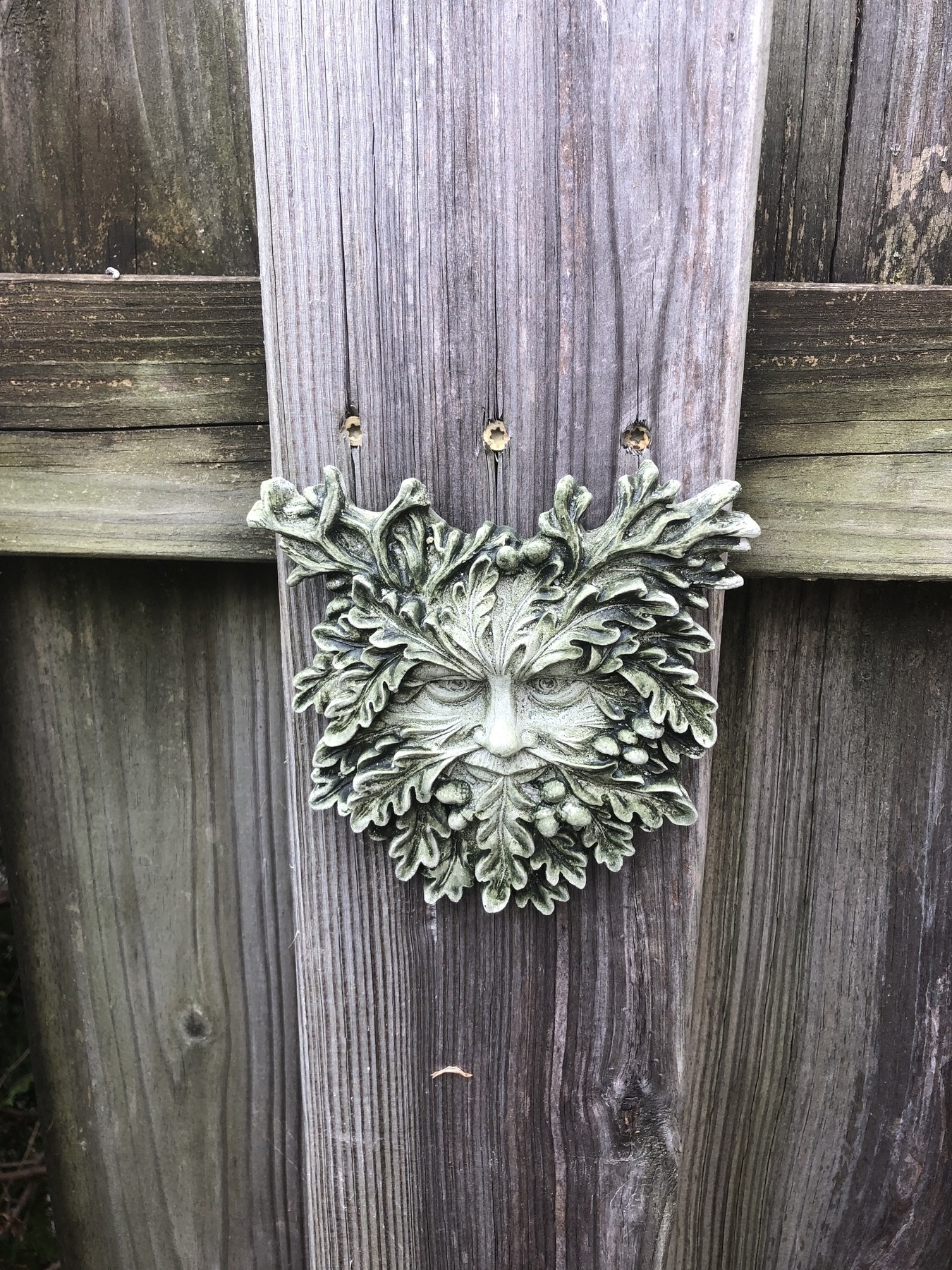